Cascading regime shifts within and across scales 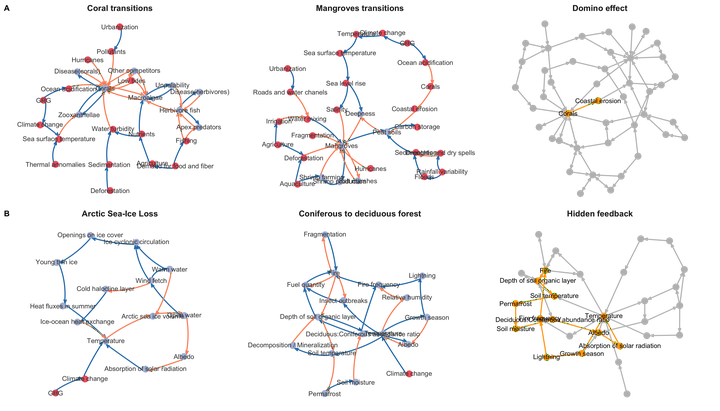 Regime shifts are large, abrupt, and persistent critical transitions in the function and structure of ecosystems. Yet, it is unknown how these transitions will interact, whether the occurrence of one will increase the likelihood of another or simply correlate at distant places. We explored two types of cascading effects: Domino effects create one-way dependencies, whereas hidden feedbacks produce two-way interactions. We compare them with the control case of driver sharing, which can induce correlations. Using 30 regime shifts described as networks, we show that 45% of regime shift pairwise combinations present at least one plausible structural interdependence. The likelihood of cascading effects depends on cross-scale interactions but differs for each type. Management of regime shifts should account for potential connections.

Summary of the paper

Ecosystems word wide can shift from one configuration to another, a transition often referred to as regime shifts. Regime shifts are critical to society because they can affect the benefits people get from nature. They are also relevant for scientist and managers because they are difficult to anticipate and reverse. Examples of regime shifts include forest to savannas, coral dominated to algae dominated reefs, or the collapse of the Greenland ice sheet. While scientists have largely focused their efforts to investigate individual regime shifts, a critical question that remains unanswered is how regime shifts could be interconnected? Whether the occurrence of one can increase the likelihood of another, or whether the occurrence of two different regime shifts is only the result of sharing the same causes.

These questions were addressed by reducing regime shifts to a network representation that summarizes their main drivers and processes underlying regime shift dynamics. By combining networks of regime shift couples, two types of cascading effects were identified. One-way interactions occur when the occurrence of a regime shift can affect the drivers of another, like a domino effect. Two-way interactions occur when there is a circular pathway (a hidden feedback) that can couple both regime shifts affecting each other. Domino effects and hidden feedbacks are thought to cause structural dependence between regime shifts. They are compared with the case of driver sharing, which can produce correlations but are independent.

The plausible cascading effects identified suggest that more attention should be paid to the systemic risk of the Earth’s ecosystems. Future research needs to account for the conditions under which plausible can become probable. Consequently, data collection efforts and methods development should account for potential interdependence of regime shifts. Likewise, current management and governance practices underestimate the potential risk of cascading regime shifts, more attention should be paid on management strategies that acknowledge regime shift interdependence.

Potential cascading effects of regime shifts. (A) An example of regime shift from forest to savanna: regime shifts are typically modeled as the interaction of fast and slow process that creates discontinuous transitions. (B) Driver sharing has the potential to sync two different regime shifts (blue) but not necessarily make them dependent, while domino effects or hidden feedbacks would couple their dynamics by creating structural dependencies (orange).

What you don’t find in the newspapers

The findings in our paper attracted the attention of journalist and social media. The Guardian, New Scientist, Aktuell Hållbarhet (in Swedish), and El Clarín (in Spanish) summarized the main findings for the general public. By the time of writing the note of The Guardian has been shared almost 11 000 times, our work made it to the front page. The news outlets focused on the importance of climate, the relationship of our work with previous work on climate tipping points, and how the challenges of connected ecosystems can be tackled from the policy realm.

During the interviews it was hard to keep a tone grounded in our results without sounding apocalyptic. Our results show that regime shifts in ecosystems can be interconnected, but they also present an opportunity to use such connections to keep ecosystems on configurations desirable for society at large. Better understanding how ecosystems work provides tools to manage them better and navigate the turbulent times ahead of us. Those notes of optimism were appreciated:

4/ Good #management in 1 #place can prevent severe #environmental #degradation elsewhere. This expands the range of #options for #action - from local to global level. EVERY ACTION COUNTS.🎬🌐 - @juanrocha & @resilienceSci @sthlmresilience

What you don’t find in the news is the story behind the paper. The question how regime shifts can be interconnected? has been chasing me for almost a decade. It began with my Master’s thesis entitled “The domino effect: a network analysis of regime shift drivers and causal pathways”. At the time (2009-2010) we developed the first version of the regime shifts database. With help of my advisors Oonsie Biggs and Garry Peterson I started thinking how a regime shift could trigger other regime shifts. The thesis got a good grade but the examiner Örjan Bodin pointed out some deficiencies in the method and gave me advise on how to over come them. Garry invited me to pursue a PhD under his supervision where my question were to be at the centre of my work. My PhD had ups and downs, more downs than ups to be honest. I answered questions such as what are the main drivers of regime shifts globally?, how can one compare regime shifts?, how can one manage ecosystems prone to regime shifts in absence of complete information?, or can we use machine learning algorithms to predict impacts of regime shifts on ecosystem services?. Each question corresponds to a paper or a chapter of my PhD, but the question about interconnections between regime shifts remained unanswered.

Part of the failure was that the methods I needed were not available yet. The math and statistics for exponential random graph models of weighted networks were published in 2012, and the software development took a bit longer. Coding consistently different regime shifts as causal loop diagrams also took us a while, at least to the point that the dataset was usable. Defeated by my elusive question I graduated from my PhD in 2015, but I was not content with the result. I put together a research proposal that Formas (a Swedish research funding agency) was happy to support and then I was back in the game by 2016 starting my own project as a postdoc.

In the meanwhile others acknowledged the importance of interconnections between tipping points and produced a number of essays on the matter. The journal Trends in Ecology and Evolution published an special issue in 2013 around the question: is there a global tipping point for planet Earth? Many experts wrote opinion pieces, some in favour and some against. But it was obvious that if there were global tipping points, they will rise from the interaction of local tipping points that would amplify each other. But the question of which tipping elements can interact and how remained unanswered. Another perspective essay published early this year pushed forwards the idea of the hot house Earth, a potential planetary state at which global warming reinforces on a trajectory of no return. This is, tipping points on the climate system (15 of them) that could be interconnected by one variable: temperature. These essays, opinion papers or perspectives are important because they help scientist agree on a broader research agenda and synthesise what we already know (the experts knowledge), but they do not produce new knowledge, they don’t answer the research question. At best, they help us understand the problem and devise testable hypotheses.

Our paper goes beyond previous work by answering the question, at least partially. We devised a method based on networks that allows us to literally connect the dots between regime shifts. It allows us to see whether two regime shifts might reinforce each other, whether one causes another, or whether the occurrence of two regime shifts might be just result of coincidentally sharing the same causing forces, but not causal interactions. Our results show that regime shifts can be interconnected and while temperature plays an important role, it is not the only mechanism connecting ecosystems in far away places.

And I said partially because it is still not a satisfactory answer. Our work allows us to see plausible connections, but it does not allows us to infer how probable they are. It was just a scratch on the surface of the problem, but we still need to crack it down. Marten Scheffer and Egbert van Nes –two scientific authorities on the study of regime shifts– wrote a perspective piece about our work. They rightly pointed out that our results while important are only qualitative. More efforts are needed to quantify the strength of cascading effects, to uncover under which circumstances they are more likely to occur. Our work gave us a static picture of which ecosystems can be connected, but it lacks the dynamics. More modelling work and empirical test of our ideas are needed to further understand cascading effects.

These limitations left some readers with more questions than answers. For example, William Clark (Harvard professor on Sustainability Science and editor of PNAS on the subject) wrote:

"Cascading regime shifts within & across scales" by Rocha et al. argues "How & when nonlinear change can be transmitted across
space & time in the Earth system should be considered in assessments & management of future environmental change." Yes, but how? https://t.co/d05NI8CYlp pic.twitter.com/jsBEpPjI2d

Answering the “but how?” requires the quantitative understanding that Scheffer and van Nes are talking about. For example, understanding how the shift from forest to savanna in the Amazon can affect mountain ecosystems in the Andes requires knowledge about how much deforestation can the Amazon withstand, how much less moisture is produced by the forest as its landcover decreases, how much of that moisture travels through the atmosphere and falls in the Andes mountains as rain, and how much that hypothetical reduction of rain (driven by deforestation in the Amazon) could impact food production in Andean countries or the cloud forest? All these questions are quantitative in nature and we lack that knowledge. The example above is only one connection between rainforest in the Amazon and cloud forest or agro-ecosystems in the Andes. The same exercise could be done for every other ecosystem. The mechanism would change, the pieces of the dominoes would be different. But it reveals that much work is ahead to better understand cascading effects. Clark is pointing out a key frontier of research. I don’t have a definite answer yet, but I’m working on it.